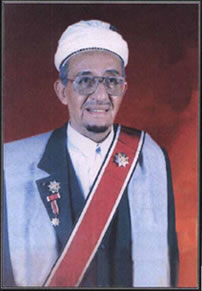 ALHAJ HUSSEIN ALI ALWATARY was born in 1922, in the city of Sana’a, Republic of Yemen. After the death of his father in 1936 and at the age of 14, Al Haj Hussein, yet very young felt obliged to leave school to start support of the family. With the good reputation of his late father, Al Haj Hussein found his way in the local textile market, as a well trusted middle-man between the various textile wholesales and retailers. In 1940, he started his own business in textiles, the sole source of imports was from Aden, which was still then under British rule. The only mode of transportation from Sana’a to Aden was by camels or donkey. By 1955, Al-Haj Hussein developed the interest to divert his trading activity to agricultural pumps. He found tremendous difficulty in introducing the new water pumping concept to the local farmers in the country, as farmers were under the impression that with the mechanical pumping method the water will be steaming hot from the well thus damaging their crops. By 1962, Al-Haj Hussein has earned the local business community most profound esteem and trust, as prominent fast growing business personality. After the revolution in 1962, Yemen had no form of infrastructure in existence, Al-Haj Hussein felt it is a national duty for the private sector to play a key role in the development of the country’s infrastructure. Along with some of his most trusted colleagues,

He played a key role in the foundation of the following :

1) The Sana’a Chamber of Commerce

3) The Yemen Bank for re-construction and development

(the first financial institution in the country).

As one of the key founders Al-Haj Hussein enjoyed the following positions :

(a) Chairman of the Yemen Land Transport Company until its nationalization

(b) Chairman of the Sana’a Chamber of Commerce, remained in this position

Development, remained an active member till his death.

(d) Member of the Board of Directors of Yemen Airlines Company, till

its nationalization by the government.

its nationalization by the government.

(f) Member of the Board of Directors of Yemen National Electricity

Company, till its nationalization by the government.

In 1978, the first ever National constituent assembly (parliament) was founded, a fully selected parliament by the President, He was selected a member of the parliament. In 1982, as Chairman of the Sana’a Chamber of Commerce. He felt the necessity to form a Federation for the Yemen Chambers of Commerce and Industry, Al-Haj was unanimously elected as the President of the Federation of the Yemen Chambers of Commerce and Industry, He remained in this post till his death. In 1994, he received a decoration from the President of Yemen, for his patriotic efforts in the civil war against the secessionist.

In 19th August, 2000, Al-Haj Hussein passed away peacefully. His death was a big loss to private sector. He remains, to be remembered with profound respect for his unreserved support to the private sector and the national economy as a whole.

ALWATARY TRADING & AGRICULTURAL DEV. CO. long and successful business history is rooted in a fundamental principle: viewing positive involvement and investments by the private sector as an important sector in the achievement of development and growth of the various productive sectors of the National Economy.

Much has changed since the founding of our business in 1940. Economic realities of the country have changed through the institution of planned economic development since the birth of September 26, 1962 Revolution. These have brought about various economic needs and priorities which in turn has brought about the growth of our business as well as its evolution from a small trading business to its present diversified stature as a business group able to cope with the modern economic and business demands.

What has not changed is our commitment to the fundamental principle upon which our firm was founded. Our growth orientation with this fundamental principle has allowed us to keep pace with the economic changes and the associated requirements which such. changes have imposed upon the Yemeni private sector. The strength of ALWATARY TRADING & AGRI. DEV. CO., under this principle and confidence in our National Economy, has made it possible for our business diversification into:

3. Development of our general trade

You will find in the pages that follow a brief portrait of our diversified business activities. Yet recognizing that growth brings about new challenges and needs, we always research and seek ways and means to face such challenges. Towards achieving growth, we entertain new ideas and prospects in areas of trade, developmental projects and support services industries viable to our national economy. We welcome opportunities to discuss viable business ventures, inclusive of joint-venture investment potentials.